Footstar runs the footwear departments in 1,383 Kmart and 833 Rite Aid stores. In March 2004, due to poor acquisitions, accounting problems and then liquidity issues, Footstar went into bankruptcy. In February 2006, the company emerged and paid creditors in full. While in bankruptcy in 2005 after years of litigation the contract with Kmart was amended. Originally set to expire on December 31, 2012, the contract now expires on December 31, 2008. After the contract expires Footstar will liquidate.


When the contract expires at the end of the year, Kmart will purchase the inventory related to its stores excluding unsalable or damaged inventory for book value. Any seasonal (4 months past season) will be purchased for 40% of cost. Footstar has already reserved $2.4 million for seasonal inventory. Any unsalable or damaged inventory will not be purchased.
The other asset remaining is Footstar’s headquarters building located in Mahwah, NJ and is listed for $19.5 million. Mike Lynch told me that they have had interest in the property but nothing has materialized.


K-mart agreed to hire substantially all store and district managers. Footstar eliminated 3 executive positions and notified 218 employees of termination. The severance cost related to these employees is $8.5 million plus $2 million in benefit costs, with $3.6 million already accrued, $6.9 million in remaining severance is not yet expensed. It is my understanding that this accounts for all of the severance. I spoke to Mike Lynch whose is CFO. This is what he said "All employees are accounted for at this juncture, but it is possible that additional severance/retention measures could still be put in place depending upon the circumstances."

Here is a chart showing the balance sheet at June 28, 2008 adjusted to the expected liquidation value: 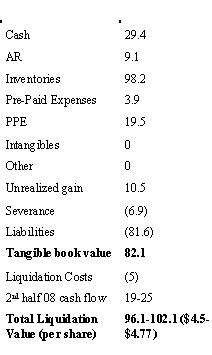 The largest risk is that management will not liquidate in an expedient manner. Footstar will file a plan of liquidation in early 09. But the sale of the headquarters building could delay the liquidation. Also, some have raised the issue that the last two dividends were not tax efficient and that they should have been set as liquidating dividends and not taxable. The OutPoint Group waged a proxy fight earlier this year attempting to name two candidates to the board. The Outpoint group owns 3% of the company. They and raised such issues as the excessive compensation for the top executives, the CEO’s total compensation was $3.5 million last year and the CFO made $700,00. Directors are paid between $110-$160 thousand year. Footstar reimbursed the chairman $160,000 for his failed bid for the company in 2006.
My estimate of second half cash flow could prove to be way off especially given the current situation in the economy. My estimate is fairly conservative but the results remain yet to be seen. But keep in mind that even without the 2nd half cash flow tangible equity is $82 million compared to a market cap of $60 million.
Posted by Alex Bossert at 11:13 AM