I purchased shares in Horsehead Holdings back in March at $4.23 per share and I recently sold my investment at $11. I made at 160% return on my money in 6 months. I invested in Horsehead because it was trading for $150 million with $123 million in cash and a net current asset value of $150 million. I was buying at 40% of book value and the replacement value of the facilities is over one billion dollars. Not only was Horsehead incredibly cheap but it was a great company to. It’s the lowest cost producer of zinc in the world and the only company that can use 100% recycled feedstocks in its facilities. Horsehead’s competitive advantage in the zinc market is further benefited because its facilities are next to steal mini mills with long term contracts for the delivery of feedstocks. It would be extremely hard for a competitor to come in and hurt the company’s supply of low cost EAF dust. No other company has been able to develop recycling techniques comparable to those of Horsehead. Horsehead has a large moat in the zinc market. I also recognized the potential for higher economical uses of the iron by product that could be worth up to $13 million per year. In addition, the company continues to increase the percentage of feedstocks derived from EAF dust. 66% of the company’s feedtsocks are EAF dust and for every percent increase, margins expand.


Revenue decreased 64% in the first half of 09 because of lower realized prices for zinc and a decrease in shipments. Net income was negative $24 million vs. a profit of $24 million in the same period last year. The decrease was due to lower prices of zinc and less production. The company idled some capacity but fixed costs are still high. EAF dust fees were also substantially lower. A $22 million charge occurred due to hedging activities.

The company resumed operations at its Rockwood, Tenn., recycling facility in August. The company said it expects to restart one of two kilns at the Rockwood plant in mid-September. It had idled the facility as a result of the economic downturn.

In September Horsehead issued 9.1 million shares in a secondary offering at $10.50 per share less discounts and commissions of $0.525 per share and received $80 million in cash. “The Company intends to use the net proceeds from the offering for general corporate purposes, which may include capital expenditures, acquisitions, working capital, investments and the repayment of indebtedness.” After the offering there are 44.364 million diluted shares outstanding. Horsehead currently has $160 million in cash when the proceeds are factored in and a market capitalization of $500 million.


The secondary offering changes the dynamics for my investment in Horsehead. The market cap of the company is now around $500 million. The price of zinc has averaged about 90% of the cost of production. Unlike oil or many other commodities, zinc is so plentiful in the world that the price of zinc is based on the cost of production and has averaged around 90% of production. Predicting the price of zinc is impossible but looking at historical prices and the cost to produce zinc it doesn’t look like their will be any large upside from here. I have no competency in zinc prices and the price of zinc meant little to my investment in Horsehead. I invested because it was the lowest cost producer of zinc and it was trading below net current asset value. Horsehaed is no longer cheap and based on historical earnings it appears fairly valued.
Posted by Alex Bossert at 9:59 AM

Alex Bossert Featured in "Of Permanent Value: The Story Of Warren Buffett" By Andy Kilpatrick

Last year I was lucky enough to be featured in a chapter of the 2009 edition of Andy Kilpatrick’s book “Of Permanent Value: The Story of Warren Buffett.” I was in chapter 205, page 1169-70. The chapter was titled “The Story Of Alex Bossert, Age 17.” Andy Kilpatrick is good friends with Warren Buffett and has been updating the book every year. The book is sold directly at the annual meeting every year.

Next year’s edition will be out in April and has a chapter on me and my friend Eric Schleien. Chapter 215 is titled: “The Alex Bossert Story, Age 18.” The chapter is on page 1215.

“Of Permanent Value” is considered by many to be the most extensive book about Warren Buffett and value investing.

Purchase his book on Amazon 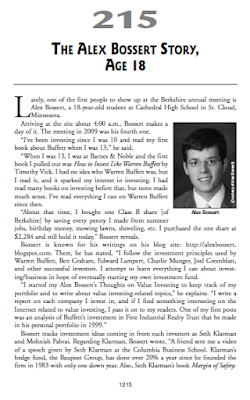